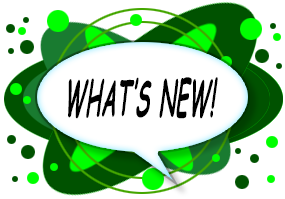 A recent blog post penned by Pat Byrnes for the international relief advocate OxFam based in the UK. 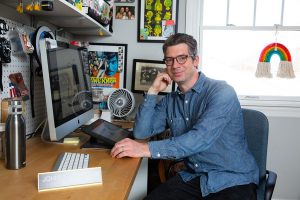 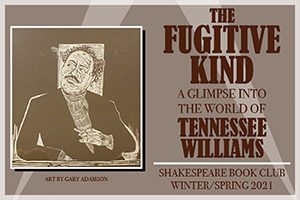 Gary Adamson’s artwork is featured in the upcoming “THE FUGITIVE KIND, A Glimpse Into the World of TENNESSEE WILLIAMS”

This program is available virtually via Zoom.
More Info> 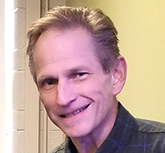 His efforts were huge in supporting our NCS chapter in the years (2008-2012). He represented the NCS at Odyssey more than once and participated in chapter meetings and Cartoonists Anonymous gatherings in 2013 and beyond. He was an extremely talented painter and illustrator, and a great guy overall, very friendly and enthusiastic in encouraging young artists to follow their dreams and use their talent to make them happen.

Our Chicago Midwest chapter of the National Cartoonists Society (NCS) hosted its first ever exhibit of cartoon art by chapter members Sept. 15 through Nov. 3, 2019 at the Beverly Arts Center.

Edward Letwenko:
A Cartoonist and Proud of it.

More about Holden and his work >> 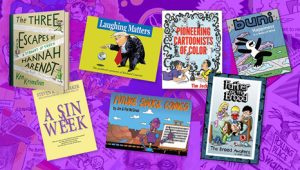 Check out our Member’s Publications in our New Cartoonist’s Bookshelf! 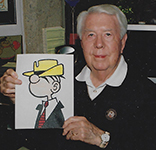 From the Desk of Richard Pietrzyk

View Richard’s photos of the late great  Mort Walker and others.
more >>

Missed the show in Chicago? Check out the exhibit video.

Our Chicago Midwest chapter of the National  Cartoonists Society (NCS) hosted its first ever exhibit of cartoon art by chapter members Sept. 15 through Nov. 3, 2019 at the Beverly Arts Center, 2407  W. 111th St., Chicago. The exhibit opened with a reception in the Simmerling Gallery on Sunday, Sept. 15, from 2 to 4 p.m.

The NSC chapter members participating in the exhibit are newspaper  comic strip and comic panel artists, caricaturists, magazine gag cartoonists, editorial cartoonists, humorous illustrators, and other  professionals working in and around Chicago and surrounding states.

“It’s not often that cartoonists emerge from their studios to reach out to  the public, so this is a great opportunity to meet them in person and see  their original work up close,” said Jim McGreal, a member of the NCS  Chicago Midwest Chapter and an organizer of the exhibit. “We have members  who work in nearly all aspects of comic art and cartooning, and we’re  really excited to be a part of this first-ever event.”

In addition to the exhibit of works of NCS cartoonists in the Simmerling  Gallery, an exhibit of works by talented cartooning students from the  Vanderpoel Art Association (Chicago) were on display in the Center’s  Atrium Gallery.

Also in conjunction with the art exhibits, the NCS Chicago Midwest Chapter  hosted a cartooning open house on the weekend following the exhibit  opening. It was held on Saturday, Sept. 21, 12 to 6 p.m., at the  Beverly Arts Center as a featured event of the 6th annual Beverly Art Walk.  The Beverly Arts Center is a trolley stop on the Walk. The open house featured two workshops led by professional cartoonists demonstrating their  cartoon art, and video cartoon presentations with selected artists in the  Center’s Baffes Theatre. 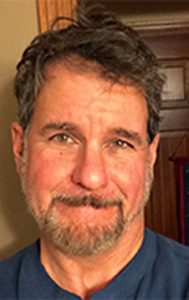 We set a goal back in 2014 to one day try to put together a group art show to exhibit the cartoon and comic art of the talented members of the Chicago Midwest chapter. It sat there on the agenda every annual meeting and frequently came up at our local watering hole get-togethers, but somehow we just couldn’t find the right location, timing, or general circumstances to bring this dream into existence. Until this year!

Our first ever chapter cartoon art show, Drawn to Humor: the Art of the NCS Chicago Midwest Chapter, opened on September 15 of this year at the Beverly Art Center on the South Side of Chicago, and ran until November 3. 19 chapter cartoonists participated in the art exhibit, featuring 85 separate works of art including a pair of 3’ x 4’ vinyl cartoon enlargements by Jon Plotkin; a large caricature of Muddy Waters performing on stage, done masterfully in oil by Chuck Senties; color digital print examples of the syndicated comic panel “Free Range” by the one and only Bill Whitehead; original process drawings of the award-winning webcomic “Buni” by Ryan Pagelow, Mad magazine cartoons and feature illustrations by Johnny Sampson; New Yorker cartoons by Ken Krimstein, single panel cartoons in vibrant watercolor by Brian Diskin, a unique Superman collage image by Jim McGreal; fine examples of the syndicated comic panel “Long Story Short” by Dan Beyer, and many other fine works too numerous to mention.

We reconvened at the BAC the weekend following the exhibit opening for a one day Cartooning Open House that offered 2 hours of video presentations in the historic Baffes Theater by Richard Pietrzyk, Jon Plotkin, Johnny Sampson, Chuck Senties, and current “Underdog” cartoonist Matt Hansel. Live caricatures in the gallery by Chuck and Ellen Lustig were also quite popular, as well as Jon demonstrating his iPad cartooning techniques on a large flatscreen TV. Short and informal cartoon workshops were available for kids and adults with books, posters, prints, and original cartoon sketches also available for purchase at both the exhibit opening and open house.

It was a lot of work over about two years, but it was sure worth it.

In the membership department, we welcomed Holden Henry as our first 27 Club member early in 2019. We’re very glad to have him in the chapter as a source of new ideas and a bit of vision, especially now that 2020 is coming up so quickly. Richard Laurent also threw his baseball cap in the ring and joined NCS as a Regular member this summer. Richard has a lot of experience to offer to our group since he works in cartooning, illustration, and the fine art of oil painting as well as teach college level classes in all three areas. He has published work in a wide variety of publications including Business Week, Outside magazine, the American Bar Association, and the Chicago Sun-Times. He is deeply involved in a social justice fine art initiative – “The Art of Influence: Breaking Criminal Traditions” and has organized a show of original artwork on this topic that is traveling around the US in 2019. He also published his first book this year, entitled “Laughing Matters!” focusing on his editorial cartoons of President Donald J. Trump.

Matt Hansel is still preparing his NCS application, polishing it to a fine warm glow before submitting it at some point soon, we hope. Tim Jackson, former editorial cartoonist for the Chicago Defender is also in the process of applying to the NCS for Regular membership. We wish them both the best of luck in these noble endeavors and look forward to their participation in the chapter.

We are working with the BAC  to create an exhibit of our member’s artwork, past and present. 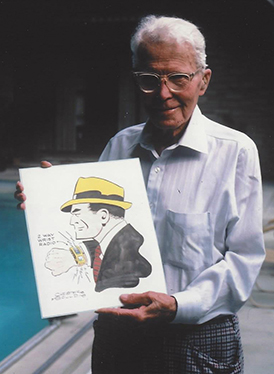 “Calling all cars!” “Calling all cars!” “Be on the lookout for a person of interest. Description as follows: flat head, hooded eyelids, pug-nosed, fish lips and freckles. Known as Flattop.” A character fitting this description would be hard to miss by the police or by the readers of the Dick Tracy comic strip. Uniquely named characters appearing in exciting, pulse-pounding stories with the stories being the walls on which cartoonist Chester Gould hung his art. Foremost in this display of art were villains whose names fit bizarre images: Pruneface of the weathered, furrowed face; the Brow with a forehead resembling a stairway to evil; the Mole, a subterranean sewer scurrying creature; all boldly drawn as if by a nightmare bound police artist. And nightmares these pen and ink characters caused in the readers of the day.

From where did cartoonist Gould imagine these villains? Many started with a name. While listening to the war news on the radio in 1943, the cartoonist heard that a …”Flattop went down in the Pacific”. The nickname of the World War II aircraft carrier provided the spark for his most famous villain. But from where did the image come? Gould kept no notes, no preliminary sketches, no first drafts. When a character saw print in the newspaper, all character studies were discarded, and when a villain was eliminated by detective Tracy, he also was eliminated from the cartoonist’s mind. Save for the classic villains, Gould had no memory of lesser creations. However, if shown a comic strip featuring a specific character, a story, a memory may materialize.

DO YOU HAVE A BIG IDEA WE CAN HELP WITH?