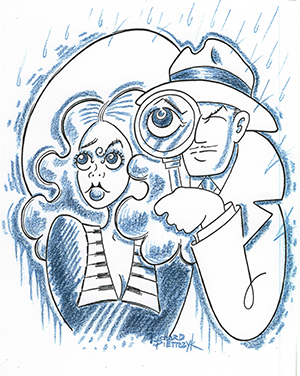 A Cartoonist Interview
by Richard Pietrzyk

1. How old were you when you first knew you wanted to be a cartoonist?

At the age of 5 or 6 I attended a family party with my parents. While the kids were playing games I started drawing from the Sunday Funnies. Specifically a drawing of “Scamp” the dog from Walt Disney’s Lady and the Tramp. The adults “Oohed” and “Ahhed” over my sketch. Then and there I knew I was on to something. By the age of 10 I started composing stories, using characters from the comic pages, usually Dick Tracy.

In my teens I created a 1920s era detective (“The Untouchables” and Dorothy Provine’s “Roaring Twenties”’ dominated television) a guy just out of college with the unlikely name of Moe Lasses. Part cliff-hanging adventure, part humor  – the supporting characters were caricatures of the faces of Hollywood – Myrna Loy, Otto Preminger, Buster Keaton.

Over the span of a few years I inked up a submission which I took to New York. The abject indifference surprised me. This is the first time the work is seeing print.

2. Did you have any famous cartoon mentors during the early part of your cartooning career? How about later in your career? 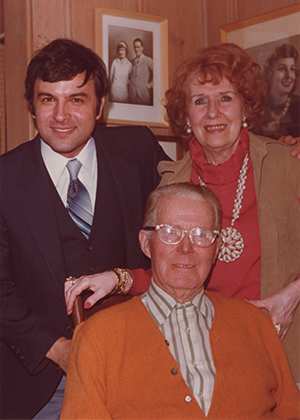 Chester Gould always was gracious about viewing my art. First through the mail, then in person. His comments were validating. During an Autumn visit to his Woodstock, Illinois home (the leaves had turned a Dick Tracy fedora yellow) I showed him one of my creations – a character named Picklepuss. Gould responded that he never thought of drawing a villain who resembled a cuc 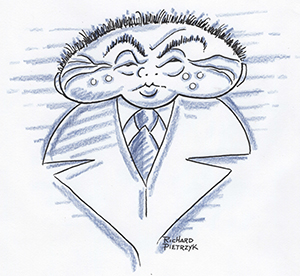 umber. Opining a side view would be challenging. After a little sketching in his home studio, we proceeded to the kitchen in search of a jar of gherkins in order to study the shape and texture of the perfect pickle. A fun memory.

Gould’s successor on “Dick Tracy” was Rick Fletcher. Rick was a masterful teacher. His creative process was a textbook on how to assemble a comic strip. His pencilwork was so precise, it hardly needed to be inked.

Dale Messick was great fun. On occasion she drew me into her strip Brenda Starr. Once as an oil sheik with a harem of bickering wives.

3. What were your favorite comic strips when you were growing up? Later? 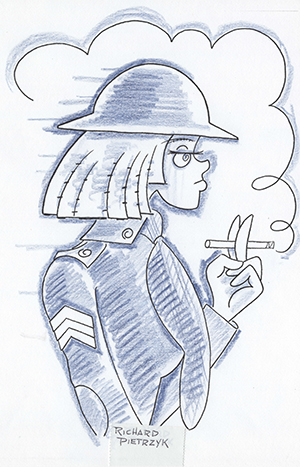 I liked comic books before comic strips. A stand out was Carl Barks’ Uncle Scrooge. The detailed art which he surrounded the ducks with – chugging steamboats, storm swept lighthouses, the undersea world of Atlantis – caught my eye.

Newspaper strips soon followed. While my friends were spending their weekly allowances on softballs and miniature cars, I was buying all 4 of the Chicago newspapers, particularly on Sunday for the color comics. The Chicago Tribune for Dick Tracy and Rick O’Shay, the Sun Times for Steve Canyon, the Chicago American for Prince Valiant and the Daily News for Lil Abner.

Occasionally the New York Times was added to the pile for Al Hirschfeld’s depiction of a Broadway production. The commonality in all was the cartoonists’ depiction of character. Gould’s grotesques, Hirschfeld’s fluid line work of a face, Al Capp’s (or was it Frank Frazetta’s ) women, all inspired me to create characters.

4. What drawing materials do you recommend for cartooning? What do you use?

When I began drawing comics I useda black ball point pen on paper. After creating several stories I learned that original art was approximately twice the size it appeared in newspapers – and oh yes artists first penciled the art, something I had not been doing.

Learning that Chester Gould used a gillott dip pen with India ink on 3-ply statmore, I picked up these materials, becoming fairly adroit with their use. Incidentally don’t fill a dip pen over your art – it may drip.

Now I first draw in pencil or blue pencil, finishing with a faber-castell black pen.

5. Aside from cartooning, are there other art forms you’ve explored? 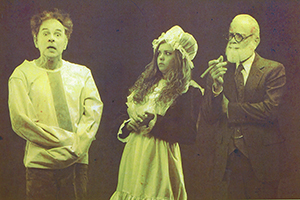 I like creating photo interpretations of my cartoon ideas. With the help of a photographer and an actress, I recently did one called “What does it take to be a cartoonist?” Answer: One has to be a little bit of a writer, a little bit of an artist and a little bit crazy. Wherein I’m pictured in a straight jacket being analyzed by Dr. Sigmund Freud and his nurse Frieda. In the photo I portray both myself and Dr. Freud.

6. Can people develop a sense of humor, or is it something you are just born with?

Some people seem to be born with a sense of humor – witness the manic styles of Jonathan Winters and Robin Williams.

Certainly a sense of humor can be nurtured by surrounding oneself with humorous writings, films, comedians’ monologues.

A regiment of creating, say 3 funny ideas or doodles a day, fosters the habit of thinking funny.

Also stay away from politics and the news.

7. Can you list 3 things that you haven’t done yet? 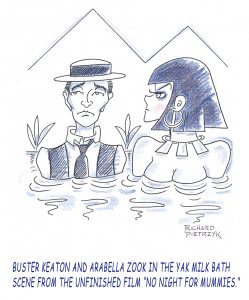 I have an idea for a 1950s-era sci-fi film in black and white. It takes place in October of 1957 after the launch of the Russian spacecraft, Sputnik, which caused world concern that our planet would call attention to itself and be visited by Martians. The story’s action occurs in a small town, not unlike Williams Bay, Wisconsin (which has an appropriate planetarium). The town descends into a panic, especially after seeing a strange helmeted figure rising up out of the depths of the local lake (an eccentric fisherman who enjoys studying the habits of fish from their perspective). Two equally eccentric scientists accelerate the panic with their posturing and postulating – roles perfect for David Hyde Pierce and Kelsey Grammer. I believe I could do it for just under 3 million.

Two
Like to draw the story of Arabella Zook. She started as an artist’s model for Toulouse- Lautrec, Degas, Monet and “The Yellow Kid” (America’s first comic strip) Richard Outcault. Modeling led to the stage where she performed as the errant loon in Tchaikovsky’s “Loon Lake” which morphed to early film work. Zook appeared in such silent classics as “Intolerance,” “The Phantom of the Opera,” and Buster Keaton’s “Cops.” Her skill at characterization caught the attention of the U.S. Department of War, which commissioned her for a series of spy missions. A tireless patriot, during the war drive of 1917 she collected over 3750 pounds of coffee grounds for the troops. Her later years were spent operating a bergamot tea and marmalade shop in Charleston, SC.

Would like to have dinner with actress Jane Seymour. She’s acted in films featuring James Bond, Winston Churchhill and Jack the Ripper. Appearing in one of my favorite infomercials, Jane most likely would make for an interesting dinner companion. Also, there’s a role perfect for her in my film.

8. What accomplishment are you the most proud of?

Certainly happy to have worked on such classic comic strips as Dick Tracy and Brenda Starr, and written scripts for Archie comics’ Katy Keen but I’m pleased to have been invited to visit the studios of such talents as Chester Gould, Milton Caniff, Charles Schulz, Arnold Roth …

I was always surprised at what was to be found (or not found) in a studio – Chester Gould’s Tribune Tower office was bare aside from his drawing board. No framed originals gracing the walls, no pencil sketches of future villains. He told me he wanted the walls to be as blank as the strathmore paper he was working on – no old characters or ideas to influence his creative process.

Mort Walker’s Stamford, Connecticut studio was the former workspace of Mount Rushmore sculptor Gutzon Borglum. In the bar area, Walker had a sculpted relief of Rushmore’s four presidents with a fifth head added – that of Beetle Bailey. And during a visit with Milton Caniff at his Palm Springs studio, I found myself seated in close proximity to an upright piano which Milt informed me was previously owned by composer Kurt Weil and wife actress Lotte Lenya (Rosa Klebb in James Bond’s “From Russia With Love”) both of whom the cartoonist knew quite well. Weil often played selections from his “3 Penny Opera” including “Mack the Knife” on the keyboard – incredible!

9. Do you have any words of wisdom that you want to share with us?

If you have an idea for a comic panel, character or graphic novel – never give it up on it. Never. Stick with it – focus and draw.

Don’t strive for perfection. Striving for perfection will paralyze an artist. Every cartoonist I’ve ever met said they would have done some aspect of their art differently if given the chance.

Tune out excessive criticism and indifference. Draw every day and have fun with it.

Thanks to the help of Arnold Roth and Bill Janocha, I was accepted in 2010. 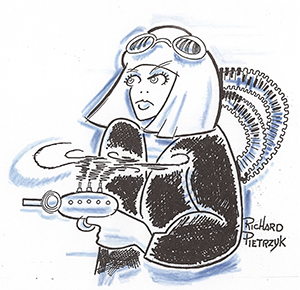