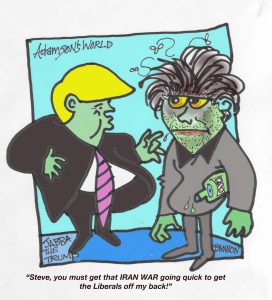 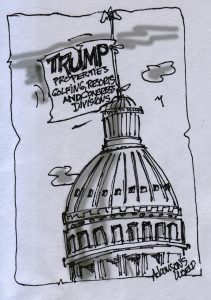 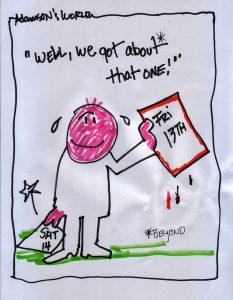 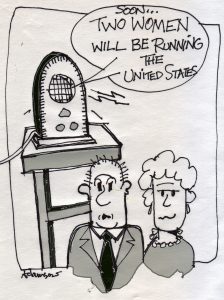 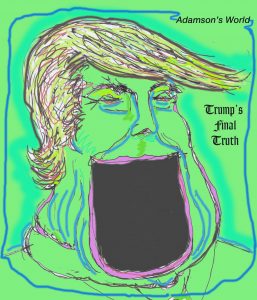 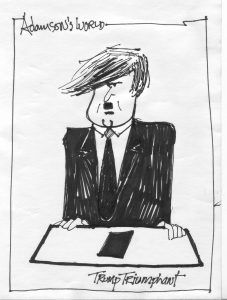 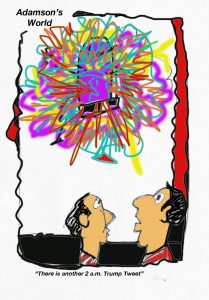 Editor: Hi Gary! Glad you had a chance to stop by and share some of your cartooning secrets with us. The cartoonists here have always have wondered about something. You often refer to the term “Cartoonery” in your correspondence with the chapter here in Chicago. We looked in our vast collection of books and online and just couldn’t find it anywhere. What is your definition of that term?

​Gary Adamson: You’ve never heard of it? The word “Cartoonery” is in the Adamson abridged dictionary under the letter “C” which circulates throughout the Gary Adamson Archive. Everyone knows that, of course. Cartoonery is a pretty simple concept in my mind. It means a light-hearted collection of visual stuff. For at least half a century, my mind has been filled with images gathered daily from all different sorts of media.

As you well know, cartoonists are often asked again and again (and again) about where they get their ideas. So….where do you get YOUR ideas for cartoons?

GA: I fixate on something that has impressed me. It doesn’t matter if it comes to me in the daytime or at night, but it’s important to record it as soon as possible. Then I dip in my visual brain container to find a way to depict that idea. Rough it out first, then revise, revise. Many times the early impression is refined or polished along the way, but the image that results must always remain fresh and true to the original idea.

Cartooning is a very popular and accessible art form, but it isn’t always easy to meet talented cartoonists or see them work since they often work at home in their private studios or somewhere kind of hidden away. Did you ever meet any famous cartoonists who helped you in your career, and how did you meet them?

GA: Actually, none. I have never met any cartoonists in person. Robert Crumb is one of my favorite graphic artists because he is a drawing street person with original graphic abilities. He remains close to his roots. It’s not that easy to do that as you go forward in your career. Let me say this…. cartooning has helped me from afar, but not up close. Over the years I have run into several cartoonists, but nothing has ever rubbed off.

What kinds of drawing materials do you use? Anything exotic?

GA: Nope. I use a Sharpie, ultra fine point on white inkjet paper. It’s simple, but effective and quick. I scan the drawings in to my computer, add color with Photoshop, and send them out as email attachments via the internet.

Did you have a favorite cartoon or comic strip when you were growing up?

GA: As a kid I read the early 1930’s comic books, including the earliest Superman and Batman DC comics. As a matter of fact, I bought the very first Superman comic (Action Comics #1) at a drugstore in Atlanta, GA in June of 1938. I wish I had it now!

“Weird” comic book titles were always a favorite. A daily comic panel I liked in the 1930’s was “Our Boarding House.” (created by Gene Ahern in 1921 and syndicated by Newspaper Enterprise Association (NEA). Ahern left NEA in 1936 to draw a similar feature at a rival syndicate. Bill Freyse took over “Our Boarding House” in 1939 and drew it until it ended syndication in 1984. – ed.)

What are the other influences that helped you in your decision to be a cartoonist?

GA: I am a child of The New Yorker and have subscribed to it for many decades. I am continually impressed by the wide array of graphic means used there, as well as the cartoon ideas and the wonderful writing. My cartoon mind has actually been formed by the editorial stance of the New Yorker magazine. It is a teacher among teachers.

I also love the work of many of the MAD Magazine and NCS cartoonists.

This doesn’t even touch on the fine artists and painters I’ve looked at and appreciated over the years: the 18th century English and French broadside artists, as well as William Gropper, Honore Daumier, Otto Dix, and George Grosz. I believe the German Expressionists have much to teach cartoonists about powerful images, especially Max Beckmann. I like Richard Lindner’s work and, of course, Picasso. There are many more.

Do you have any other advice, ideas, or thoughts to share?

GA: Formal art instruction is not always necessary to cartoonery, but education is always important in understanding the world we live in. In my educational journey, I picked up a BA from Drury University in Springfield, MO as a young man, and went back to college in my 50’s to get an MA and later an MFA in Art at Fotbonne University in St. Louis. It’s never too late to learn something new.

I’ve done editing and graphics work in industry over the years, but all along I’ve done cartooning. Never stopped. Never will.

On a personal note, I cherish the get-well greeting cards that the NCS Chicago chapter members sent me when I was in recovery from a stroke in early 2015. The cartoons are framed and up on the walls of my studio. Such Talent! And Skill! They are as good as any artists around. Sometimes I think I should just hang it up because I see such good cartoon talent around me all the time.

But, no! I ignore my limits and just dive right back in to drawing a new cartoon when the idea comes to me. I love cartooning – and cartoonery – to the point of insanity. So…here I am! What a way to go. HAR!