Our NCS Chapter participates in many events throughout the year. If you’re interested in having us at your event, give us a holler.

Our Chicago Midwest chapter of the National  Cartoonists Society (NCS) will host its first ever exhibit of cartoon art by chapter members Sept. 15 through Nov. 3 at the Beverly Arts Center, 2407  W. 111th St., Chicago. The exhibit opens with a reception in the Simmerling Gallery on Sunday, Sept. 15, from 2 to 4 p.m.

The NSC chapter members participating in the upcoming exhibit are newspaper  comic strip and comic panel artists, caricaturists, magazine gag cartoonists, editorial cartoonists, humorous illustrators, and other  professionals working in and around Chicago and surrounding states.

“It’s not often that cartoonists emerge from their studios to reach out to  the public, so this is a great opportunity to meet them in person and see  their original work up close,” said Jim McGreal, a member of the NCS  Chicago Midwest Chapter and an organizer of the exhibit. “We have members  who work in nearly all aspects of comic art and cartooning, and we’re  really excited to be a part of this first-ever event.”

In addition to the exhibit of works of NCS cartoonists in the Simmerling  Gallery, an exhibit of works by talented cartooning students from the  Vanderpoel Art Association (Chicago) will be on display in the Center’s  Atrium Gallery.

Also in conjunction with the art exhibits, the NCS Chicago Midwest Chapter  will host a cartooning open house on the weekend following the exhibit  opening. It will be held on Saturday, Sept. 21, 12 to 6 p.m., at the  Beverly Arts Center as a featured event of the 6th annual Beverly Art Walk.  The Beverly Arts Center is a trolley stop on the Walk. The open house will  feature two workshops led by professional cartoonists demonstrating their  cartoon art, and video cartoon presentations with selected artists in the  Center’s Baffes Theatre. 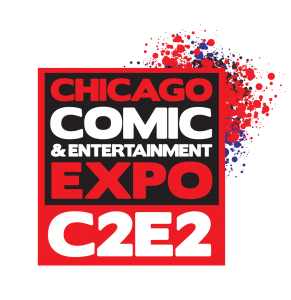 This will be our second appearance  C2E2. Our booth will feature artists from our Chicago Chapter as well as luminaries from all over the country.

The Chicago Comic & Entertainment Expo – also known as C2E2 – is a comic book and pop culture convention spanning the latest and greatest from the world of comics, movies, television, toys, anime, manga and video games.

We were at  BOOTH #743.  Below were our attending artists. 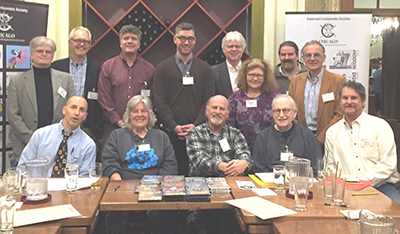 We convened our annual meeting in a private wine cellar room at the historic Hotel Carleton in Oak Park, IL in early November, discussing the many events and activities of the year. Managing to keep the meeting to a reasonable length, we successfully concluded it in less than 2 hours with one major decision of chapter  business going forward into the new year. Upon taking a vote, we voted unanimously (in session) to change the name of our chapter from Chicago to Chicago Midwest to reflect the wider geographical area of our current, and likely future chapter membership. This should also help in recruitment of cartoonists who  work in smaller cities and towns surrounding the metropolitan Chicago area. 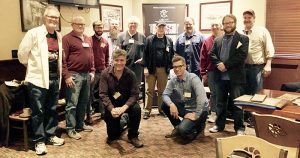 We got together again last Sunday (Oct 21) at a new location: RAM Brewery & Restaurant in Rosemont, IL. This was a re-schedule from last month (Sept 16) when we had planned on meeting at the wonderfully-named Peckish Pig in Evanston, but couldn’t get enough RSVP’s to “qualify” for a reservation: minimum 12. We seem to have a problem with The PP (0-for-2 tries), and Evanston in general. We can’t seem to get a regular spot there. Suggestions are welcome.

As an added note,  the RAM Brewery in Schaumburg closed permanently in September so we were looking for a new central location. The RAM Rosemont manager (Jorge)  generously allowed us to have the exclusive use of their big room at no extra charge. I hope we can come back here in 2019. I had to schmooze us out of the bar into the dining room, and then out of the dining room into the big private room so we could set up our banners and overall it worked pretty well.

Al Rozanski came down from Milwaukee, WI to win first place in the Farthest Cartoonist Travel distance award which, to no one’s great surprise, had no prize at all. Holden Henry and Dan Beyer came from Kenosha to tie for second place, also with no prize. It’s a tough crowd. The Brians met Al at one of the first KFOC (Kenosha Festival of Cartooning) events back in 2012 or so, and we met Holden this summer when we had our first Cartoonists Anonymous get together outside of the Chicago area at a fine pub called… Ashling on the Lough (Lake) in Kenosha. All are good friends of John and Anne Hambrock, and we owe the Hambrocks a big thanks because they are all great guys and cartoonists. Third place went to Bruce Quast of the Rockford area, who has the best attendance record of anybody as well as being a great guy and cartoonist as well. We thank them all for their consistency and willingness to travel to come to these social gatherings where nothing big really takes place, but everyone seems to enjoy them most of the time.

LOCAL CHAPTER NEWS: Chuck has completed our 9th NCSL membership application, and will be inducted at the NCS Chicago chapter annual meeting on November 4. He came to Rosemont directly from a caricature gig at Soldier Field where the Bears were finding a way to lose again to the Patriots, 38-31. Al and Holden both took chapter membership applications and are considering possibly joining the chapter. Richard Laurent has his first book, “Laughing Matters” coming out very soon, so keep an eye open for that. He brought a proof of the cover for our enjoyment which I scanned and should be in the attached photo department above. Johnny has completed some great work recently for the NY Times Review of Books. Al sold the first cartoon of his cartooning career re-boot to a magazine in Northern California. Congrats to Al on his hard work beginning to pay off. Bruce informed us that he will be concentrating in the future on his webcomic “Faron Square” as his time as the editorial cartoonist at the Rockford Register-Star is over, as of a couple of weeks ago. Matt has been working hard on Underdog #1 ( it might be done already) and will likely have a few more issues in the pipeline coming his way. Good luck to both of them.

ART SHOW: Jim did a short presentation on the upcoming first ever NCS Chicago Chapter Art Show and Sale set for September-November of 2019 in the Beverly Art Center (BAC) in Beverly on the South Side of Chicago. We tried to get it cabled up to one of the big flat screens mounted on the wall, but it didn’t work due to bad connections. We passed around a Brian Diskin-designed flyer asking for participation and got 6 “YES” volunteers so we’re off! It’s a great start. We have signed a contract (that has no escape clause) so we are looking for more cartoonists to step up at future events, since we estimated that we plan to have the work of at least 20 artists in the show to make it a fine representation of our collective and individual cartooning talents.  Jim brought samples of framed cartoons and a source link to a place where pretty nice frames can be bought for very cheap. All art needs to be framed before submitting to the show next year.

Participation in the Art Show and Sale is open only to NCS Chicago chapter members.

SINGLE PANEL CARTOONS: We had not done a workshop on a specific topic at one of these Anonymous meetings, so the procedure was a little vague. So instead, we just put out our cartoons in a pile on the table (me) or in a nice binder (A binder full of cartoons) like Al and a few others and then talked about them. It was kind of informal, but it seemed to work well as  one-on-one discussion/suggestion panels. Maybe we’ll just call it Show & Tell next time.

REMINDER #1: The NCS Chicago chapter Annual Meeting is on Sunday, November 4 at The Hotel Carleton in Oak Park. Meeting is from 3:30pm-5:30pm, and dinner will follow at Barclay’s. Only NCS national and local chapter members are allowed to attend this meeting. No spouses or guests.

REMINDER #2: Our year end NCS Chapter Holiday Party is set for Sunday, December 2 at Chief O’Neill’s Irish Pub on Elston Avenue starting at 4pm. Spouses and friends are welcome for this one. RSVP due by November 30. More info later.

On a sad note, we found out that Pat Byrnes’ father passed away on Saturday night after a long illness and he was unable to be with us as planned. Our sincere thoughts and sympathy go out to him and his family at this difficult time.

That’s about it. This was our last Cartoonists Anonymous in 2018. It was a great year and we accomplished a lot, but we have an even bigger and better year planned for 2019!
Hope to see you all soon.

St. Jude is leading the way the world understands, treats and defeats childhood cancer and other life-threatening diseases.

This was our first year at  C2E2. Our booth featured artists from our Chicago Chapter as well as luminaries from all over the country.

The Chicago Comic & Entertainment Expo – also known as C2E2 – is a comic book and pop culture convention spanning the latest and greatest from the world of comics, movies, television, toys, anime, manga and video games.

We were at  BOOTH 441.  Below were our attending artists.

See you next year! 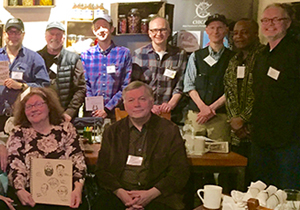 We had our second Cartoonists Anonymous social event of 2018 at the Farmhouse Restaurant in downtown Evanston, IL. We had a total of 18 cartoonists/illustrators/comic artists in attendance that night which is a fantastic turnout under any circumstances. First-timers included  Richard Laurent, painter and art professor at Columbia College; Elizabeth Bjornseth, a talented cartoonist with a real job in finance, and Rich Sparks, a widely published and quirky humorous illustrator/cartoonist.

Marlene Goodman also did caricatures of the entire group. Thanks Marlene!

Odyssey is a two-day fine arts festival held at Stevenson High School every other year.  During those two days, more than 160 visual and performing artists step foot into Stevenson to share their skills and insights through performances, lectures, and hands-on workshops. 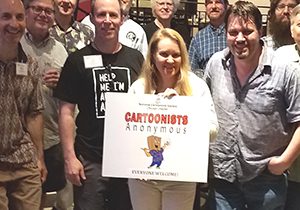 Our Fall, 2017  get-together included NCS member and their guests. It also doubled as our Holiday gathering.

The NCS/Chicago chapter sponsors regular meetings for working Chicago area cartoonists/caricaturists/animators and others who want to socialize, network, and/or just doodle with other similarly minded creative cartoonists in a friendly informal environment, while drinking beer. Interested in stopping by? Contact T. Brian Kelly for info on our next event. We meet in Oak Park, Evanston, and various locations in Chicago.

Our Fall, 2017 chapter meeting on October 22 took place in  the executive  boardroom of the Chicago Tribune in the Tribune Tower in downtown Chicago.

Thanks to Tribune editorial cartoonist Scott Stantis for his help in organizing this event.

St. Jude is leading the way the world understands, treats and defeats childhood cancer and other life-threatening diseases. 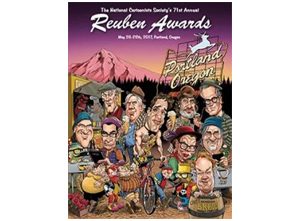 Our master of Ceremonies for the Reuben Awards Dinner was that irrepressible and charismatic cartoonist and illustrator, NICK GALIFIANAKIS! 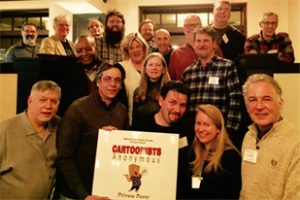 Our Winter, 2017  get-together included NCS member and their guests.

The NCS/Chicago chapter sponsors regular meetings for working Chicago area cartoonists/caricaturists/animators and others who want to socialize, network, and/or just doodle with other similarly minded creative cartoonists in a friendly informal environment, while drinking beer. Interested in stopping by?

Contact T. Brian Kelly for info on our next event. We meet in Oak Park, Evanston, and various locations in Chicago.