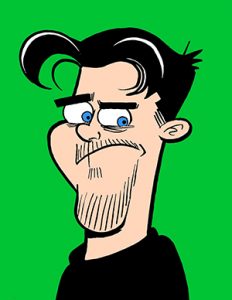 Kenny Durkin is a Wisconsin-based freelance cartoonist who has illustrated children’s books, created artwork for two off-Broadway musicals, designed everything from plush toys to garden gnomes, self-published his own comic books, and had his cartoons on apparel for AMC’s Duck Dynasty, Disney’s The Muppets, and The Jim Henson Company. His online comic “Father of the Brood” takes a humorous look at his life with his wife and four kids. He drew caricatures in Walt Disney World for 13 years and continues to draw them at events and functions in the Wisconsin and Illinois area.